Astrill VPN is a popular choice for China and to bypass censored countries. Can it hold up this promise? How well does Astrill VPN perform in all other aspects? I ran an abundance of tests to see how well it performs. In this deep dive review, we will answer those questions from security, geoblocking, speed, streaming, and more.

Astrill VPN is headquartered in the Seychelles, this is an ideal location for a VPN provider as countries like Seychelles, Panama, British Virgin Islands, among others are known for not sharing intelligence with other countries which make it a privacy haven. Astrill VPN is not required whatsoever to share any information or report any storange of data. This is great as they are not part of the the 5 Eyes, 9 Eyes, or 14 Eyes surveillance alliances. On the countrary countries like the US share their info

Astrill VPN has an interensting policy, they take a different approach but they do not keep personally identifiable data. They do log some information while your session is active but remove it permanantly when disconnected. This means all your data, browsing, and web traffic remains hidden and are not stored.

Here is what Astrill VPN collects while your session is active:

We would have liked to see no information logged while active but rest assured none of the information is kept and they mention it is solely used to limit the number of devices connecting from single account simultaneously. They are also committed to protecting your digital privacy.

How secure is Astrill VPN?

Astrill VPN offers a variety of protocols StealthVPN, OpenWeb, Wireguard, TCP/UDP OpenVPN, OpenConnect, Cisco IPSec, IKEv2/IPSec, L2TP/IPSec, and SSTP. If you want the best security and obfuscation we recommend StealthVPN which is inspired by OpenVPN:

StealthVPN is another proprietary protocol by Astrill. It is inspired by OpenVPN and performs an additional obfuscation of traffic which makes it undetectable for automated firewall systems. StealthVPN is very stable and it can work with both UDP and TCP modes. Just like OpenWeb, it is only available with official Astrill VPN software.
StealthVPN data streams are protected with AES-256 and authentication is done with certificates. This makes the protocol not only very secure but also very stable. The connection is kept alive throughout the duration of a session and all traffic from your computer is routed through Astrill VPN, so there are no IP or DNS leaks. 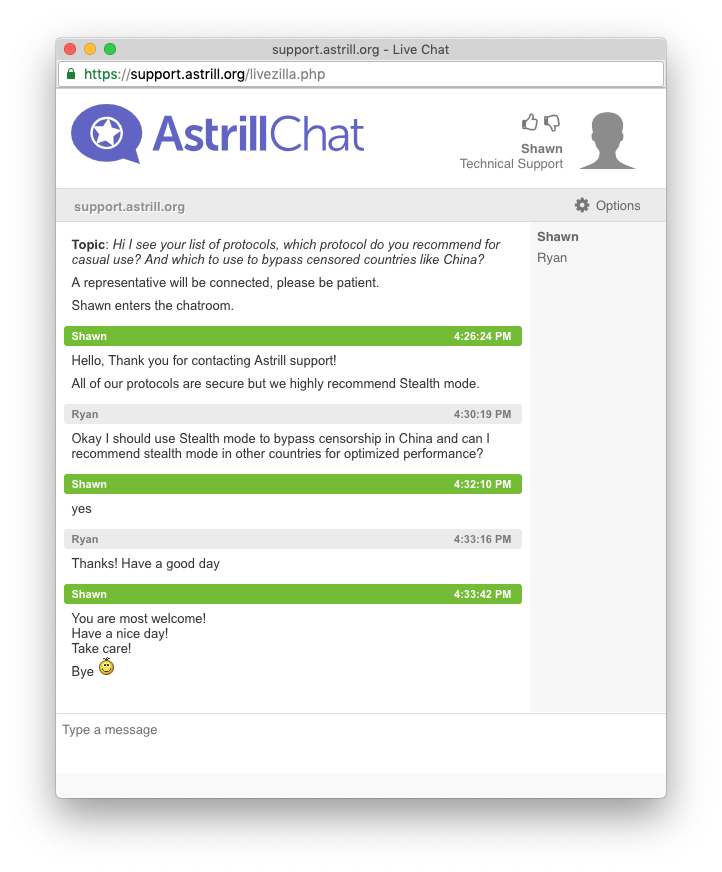 An important feature Astrill VPN offers is a kill switch(App Guard). The kill switch is an advanced security measure, which prevents your data from leaking to the web. If your VPN connection is ever interrupted Astrill VPN will immediately stop traffic from entering or leaving your device. By halting all online activity, App Guard keeps your personal information from being exposed to your internet service provider (ISP) or other prying eyes.

Another feature that they use is Smart Mode, Astrill VPN Smart Mode allows you to use the Internet with regional IP addresses keeping Internet speeds high and not raising any suspicion. This empowers high end stealth making it harder for authorites to spot. Make sure to enbale these advanced features.

Astrill VPN also has a split tunneling feature meaning if you want to use VPN only with certain applications they give you an option to include or exclude these websites or applications.

Multihop(Double encryption) is available as a VIP add on.

Astrill VPN offers 140+ servers, 114 locations in 62 countries. You can select the server you want to connect to based on location and by searching for the location while highlighting what servers are available for torrenting by a yellow star. They offer a mid range of server coverage compared to other VPNs we reviewed however there are plenty of servers in popular spots including the best coverage in the US. Other high performence areas are Europe and Asia Pacific. You can find a list of all their servers here.

Astrill VPN is excellent for streaming and does a great job of unblocking popular streaming services. I tested many of their server locations and all had no problem acessing Netflix, one of the toughest geoblocking services.

Astrill VPN is good for torrenting and they specify which servers to use. It offers features like P2P-optimized servers that allow port forwarding, a kill switch, and AES-256 encryption. For torrenting, the Kill switch feature is nice to have the extra security. Make sure the kill switch is enabled in the VPN app. We also found Astrill VPN works great with Kodi. We tested this and found no issues.

Astrill VPN has average speeds but it is fast enough to handle most purposes. If you are looking for a faster VPN check out our fastest VPNs. We conducted a speed test, first by testing local speeds from New York and secondly international speeds. We tested 4 international server locations which are UK, Australia, Japan, and Canada.

Finding a VPN in China is difficult, China has tough restrictions and government surveillance. Some VPN's are not powerful enough to bypass these restrictions and are blocked from accessing VPN sites and apps. As you might know by now Astrill VPN is excellent for bypassing Censorship. This is largely to their proprietary StealthVPN protocol and its Smart Mode that use obfuscation while also disguising that you are even using a VPN. It easily bypasses the Great Firewall of China and other censored countries making it the top recommended VPN for China.

Astrill VPN is simple to install on each platform. Their interface is ordinary and a bit dated looking but is pact with features and simple to use. You can access its advanced settings through the hamburger icon(Three horizontal bars). 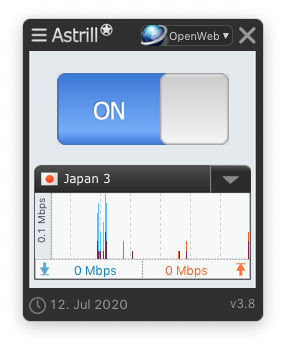 There are also plenty of support on their webiste for additional help which include installation guides, FAQs, and video tutorials.

Astrill VPN has 24/7 live chat support that is very responsive. If you ever have any problems rest assured they will be helpful as they are customer focused. 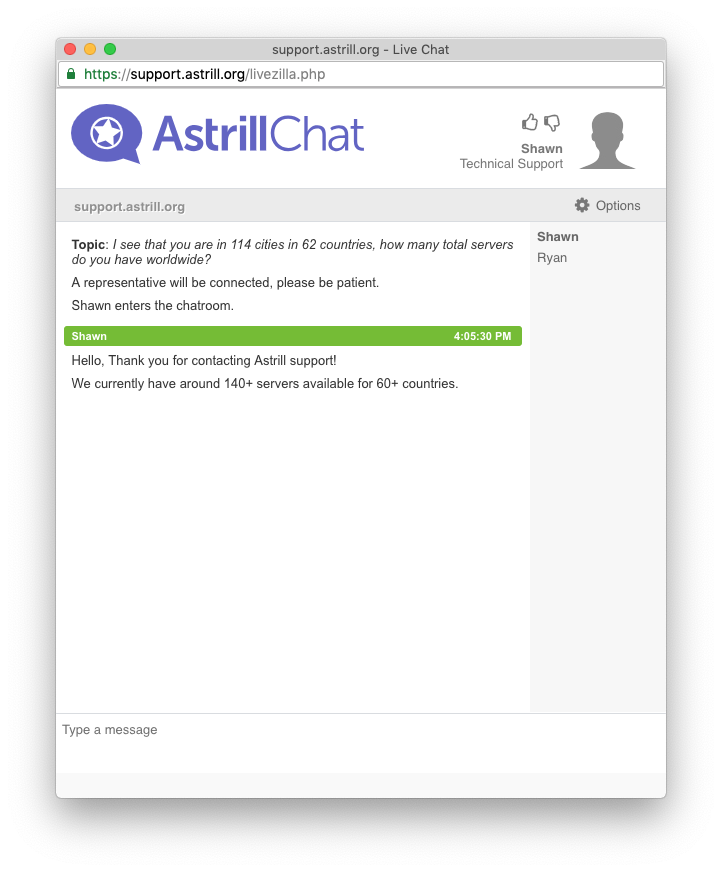 Astrill VPN pricing is straight forward, they offer three different plans. Each plan includes all of the features and functionality they offer so there is no upselling. They are more expensive than some competitors, however the longer you purchase a subscription for the lower your monthly fee will be and they offer a 7-day free trial. Also, they are dedicated to providing a superior VPN experience to its customers making it a value.

There is a lot to like about Astrill VPN, we like them due to its military-grade encryption, protocols, and optimized torrenting servers. We recommend Astrill VPN to anyone that wants to bypass censorship in countries like China, Iran, Turkey, or UAE

Astrill VPN tops our list for best VPN services in China with stealthy obfuscation, VPN Kill Switch, P2P availability while breaking down geoblocks there are plenty of features to satisfy customers.

Try Astrill VPN for 30 days, if your not satisfied they offer a money-back guarantee no questions asked!