CyberGhost is a popular VPN service that boosts over 30 million users. I ran an abdunce of tests to see how well it really performs. In this deep dive review, we will answer those questiions from security, geoblocking, speed, streaming, and more.

CrossRider is a potentially unwanted application (PUP) that can modify the user's homepage and install additional bundled software. This malware often comes from non-official sources of applications rather than the official source.

Crossrider’s advertising and browser extension platforms allowed software developers to create and monetize apps and browser add-ons through aggressive ad injection, or ‘adware’. Futhermore, Crossrider’s adware has been found affecting not only Windows but Macs as well in a unique way:

A new variant of the Crossrider adware has been spotted that is infecting Macs in a unique way. For the most part, this variant is still quite ordinary, doing some of the same old things that we’ve been seeing for years in Mac adware. However, the use of a configuration profile introduces a unique new method for maintaining persistence.

Controversies led Crossider to shut its ad and development platforms in 2016, and in 2018 the company changed its name to Kape Technologies. Kape Technologies has been open about the fact that this name change was to distance itself from the strong association to the past activities of the company.

With the CyberGhost acquisition, Kape Technologies has shifted to proving dedicated effort to protect user privacy, a complete turnaround.

Ironically CyberGhost focused on privacy and security from day one while Crossrider started out as a company that distributed browser extensions and developed ad tech products. Quite the opposite of what we did.

With the more than questionable past, ultimately your decision to trust Cyberghost depends on your level of comfort. In the following section we will dive into their logging policy to understand what information they collect.

CyberGhost is headquartered in the Bucharest, Romania, this is ideal for location for a VPN provider as countries like Romania, Panama, the British Virgin Islands are known for not sharing intelligence with other countries which makes it a private haven. Because CyberGhost is based in Romania, they are not required whatsoever to share any information or report storage of data. This is great as they are not part of the the 5 Eyes, 9 Eyes, or 14 Eyes surveillance alliances. On the contrary countries like the US, UK, and Australia share their info

CyberGhost does not track any personally identifiable activity logs. This means all your data, browsing, and web traffic remains hidden and are not stored or logged anywhere.

Here is what CyberGhost does collect:

Our mission at CyberGhost VPN is to build the right tools for you, so your privacy can have a future. And every day, we turn more than 30 million people from all over the world digitally invisible. And it’s a responsibility we take very seriously.

Even though they ensure a no log policy, they do keep track of some hardware logs mainly to track simutaneous devices, however this is not stated in their logging policy. 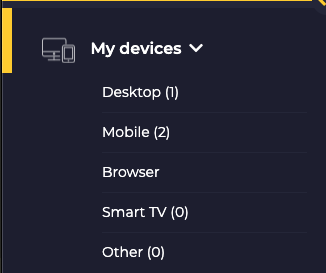 In 2012, Cyberghost commissioned an independent audit to verify its security practices but this audit is outdated especially with the new ownership.

How secure is CyberGhost?

CyberGhost offers a variety of protocols OpenVPN, L2TP-IPsec, PPTP and WireGuard(Beta). It is defaulted to automatic and recommended as CyberGhost will determine the best protocol to use. OpenVPN is the industry leading encryption protocol that provides the best balance between performance and privacy.

WireGuard is a new public protocol that is still in the early stages but with the potential to be faster than OpenVPN. Top VPNs will look to add this protocol as it progresses so it is good to see CyberGhost adapt this early on.

One of the features CyberGhost provides is automated HTTPS redirection. CyberGhost forces sites over the secure https protocol.

They also provide an online tracking blocker. Besides your IP address websites can track your digital footprint through cookies that CyberGhost blocks so websites will not know you ever visited the website.

Another feature that CyberGhost offers is a kill switch. The kill switch is an advanced security measure, which prevents your data from leaking to the web. If your VPN connection is ever interrupted CyberGhost will immediately stop traffic from entering or leaving your device. By halting all online activity, Network Lock keeps your personal information from being exposed to your internet service provider (ISP) or other prying eyes.

CyberGhost offers split tunneling but only for Android. They also currently do not offer port forwarding. We wish CyberGhost offered these features that other top VPNs offer. If your hoping to find more features check out Surshark, a feature-rich VPN.

CyberGhost has plenty of server locations for your needs. They offer 6,000+ servers, 112 locations in 90 countries. You can select the server you want to connect based on location or by streaming platform. The servers highlight which are available for torrenting and whether they are vitual or physical servers. You can find a list of all their servers here but they also do a great job by finding the right server based on your needs. 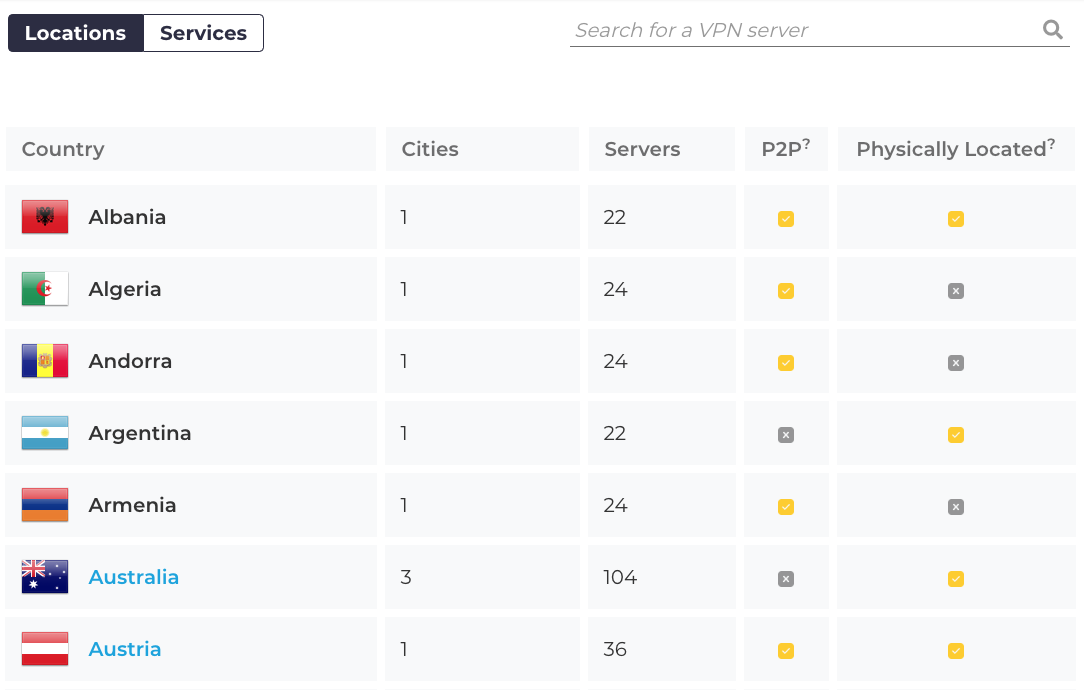 Cyberghost is excellent for streaming and does a great job of bypassing geoblocks with their Smart DNS tool. I tested many of their server locations and all had no problem acessing Netflix, one of the toughest geoblocking services. Their VPN unlocks the US, UK, France and Germany Netflix libraries.

They also do a great job by finding the right server based on your needs, you can select what kind of streming service you want to connect to: 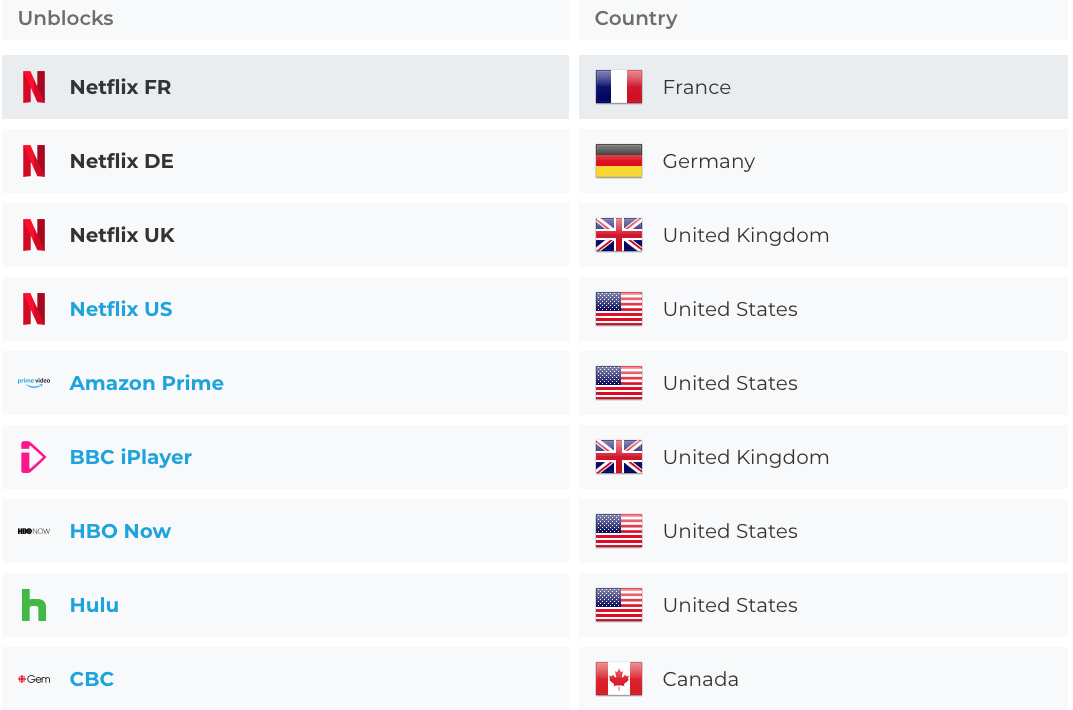 As mentioned CyberGhost is good for torrenting and they specify which servers to use. Their torrenting servers allow P2P traffic optimized. For torrenting, the Kill switch feature is nice to have the extra security. Make sure the kill switch is enabled in the VPN app. We also found CyberGhost works great with Kodi. We tested this and found no issues.

CyberGhost has decent local speeds but plenty enough for 4K streaming, however, it is not the fastest VPN and lags a bit behing top competitors. We notcied the connection times could be a bit faster however this may depend on the server location. We conducted a speed test, first by testing local speeds from New York and secondly international speeds. We tested 4 international server locations which are UK, Australia, Japan, and Canada.

Finding a VPN in China is difficult, China has tough restrictions and government surveillance. Some VPN's are not powerful enough to bypass these restrictions and are blocked from accessing VPN sites and apps. Unfortunately CyberGhost does not bypass Chinas censorship mainly because they do not have obfuscation technology. We do not reccommend CyberGhost to users that want to bypass censorship.

CyberGhost makes it very simple and easy to use across all platforms. It is very easy to use their interface which is consistent and very similar across platforms. The interface shares a common connection status, list of servers, and a simple connect button. We did experience a few dropped connections and bit more than we would liike to see.

They provide FAQs, getting started guides, troubleshooting, and anouncements in their support section.

CyberGhost has 24/7 live chat support that is very responsive. If you ever had any problems rest assured they will be helpful as they are customer focused. You can also reach out to their slive support chat.

CyberGhost pricing is straight forward, they offer three different plans. Each plan includes all of the features and functionality they offer so there is no upselling. They are a friendly budget VPN and you can take advantage of a longer subscription for a lower monthly fee.

There is a lot to like about CyberGhost, we like CyberGhost due to its military grade encryption and optimized streaming/torrenting servers. We recommend this VPN if your looking for an extra layer of security and do not need to bypass censorship in countries like China, Iran, Turkey, or UAE. See our top VPNs if your are looking for more features, faster speeds, or a trusted history.

CyberGhost provides an extra layer of security with it's bullet proof encryption with dedicated servers for streaming and torrenting.

Try CyberGhost for 30 days, if your not satisfied they offer a money-back guarantee no questions asked!