Does NordVPN deliver on its claims for the best VPN in 2021? How does it compare to ExpressVPN, CyberGhost, and others? I ran an abundance of tests to see how well it really performs. In this deep dive review, we will answer those questions from security, geoblocking, speed, streaming, and more.

Nord VPN is headquartered in Panama, this is ideal for location for a VPN provider as countries like Panama, British Virgin Islands are known for not sharing intelligence with other countries which make it a provacy haven. Pananma does not report any storange of data. On the countrary countries like the US, UK, and Australia share their info.

NordVPN have a strict no logs policy when it comes to seeing user activity online: NordVPN is based in Panama, which does not require data storage.

Nord VPN has a zero logging policy, they do not track any information. This means all your data, browsing, and web traffic remains hidden and are not stored or logged anywhere.

NordVPN guarantees a strict no-logs policy for NordVPN services, meaning that your activities using NordVPN Services are provided by automated technical process, are not monitored, recorded, logged, stored or passed to any third party.

How secure is NordVPN?

One of the features Nord VPN offers is a kill switch. The kill switch is an advanced security measure, which prevents your data from leaking to the web.

With the kill switch extension you can control what apps are blocked. If the VPN connection drops you decide what apps are blocked until the VPN connection is restored. This extension could be quite useful for torrenting to shut down your P2P traffic and protect against IP leaks. Nord VPN offers the most control with its kill switch compared to other VPN's.

The double VPN feature routes your traffic through two different servers while encrypting your data, however this will slow your speed because of the extra step it takes to route your traffic through the second server so we recommend using this feature when you need an extra level of security.

CyberSec is NordVPN's malware and ad blocker. This helps block malicious websites, phishing scams, and flashy ads. If you ever been to a website with a ton of ads that slow down your browsing experience it can be a bit much so it is nice to have an ad blocker like CyberSec.

CyberSec can also help with known malicious websites and phishing scams. NordVPN updates its database continuously with websites that appear to be malicious but the jury is still out on how effective CyberSec can block new threats. At the moment it appears not to be effective against new threats. Nonetheless, it is nice to have some protection against known threats and a nice ad blocker to boot.

NordVPN has an abudance of server locations. They offer 5161+ locations in 59 countries.

You can check out the full list by country. They have specialty servers available for P2P, obfuscation, double VPN, onion(Tor) over VPN, and dedicated IP. 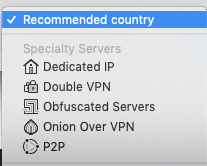 You can setup auto connect by setting your recommended server while also enabling the auto launch feature.

Nord VPN does a great job of bypassing geoblocks. I tested many of their server locations and all had no problem acessing Netflix, one of the toughest geoblocking services.

How does Nord VPN accomplish this?

It accomplishes this through its proprietary SmartPlay feature

"SmartPlay is a NordVPN feature that helps you securely access the content that would otherwise be unavailable. Best of all, it does it in a way that you never even have to think about it. It’s implemented in our apps seamlessly, so there’s nothing to set up, update, or activate."

"With the SmartPlay technology, all you need to do is connect to the right NordVPN server. That’s it: you can access your content safely without any manual configuration."

Nord VPN works well with users looking for torrenting. They have several servers are dedicated to P2P file sharing. They list specialty servers that can be used to facilitate the P2P process. If you try to torrent while connected to a non-P2P specialty server, the app will redirect you to your traffic to a dedicated server in Canada or the Netherlands. For torrenting, the kill switch feature is nice to have the extra security. Make sure the kill switch is enabled in the VPN app.

You can connect to a P2P server by country and many countries have multiple P2P optimized servers. 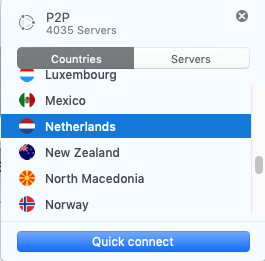 NordVPN has blazing fast speeds, in fact it tops our rankings for fastest VPNs. We conducted a speed test, first by testing local speeds from New York and secondly international speeds. We tested 4 international server locations which are UK, Australia, Japan, and Canada.

Finding a VPN in China is difficult, China has tough restrictions and government surveillance. Some VPN's are not powerful enough to bypass these restrictions and are blocked from accessing VPN sites and apps. Unfortunately, Nord VPN is not reliable enough to work in Chima. One week it works but other weeks it does not. Some users have experienced issues not being able to access the service in China.

We update our reviews regularly so if Nord VPN can improve their reliablilty we will update this section of the review.

Nord VPN's interface through both desktop and mobile versions are both very good. The VPN apps are easy to navigate around and find what you want. 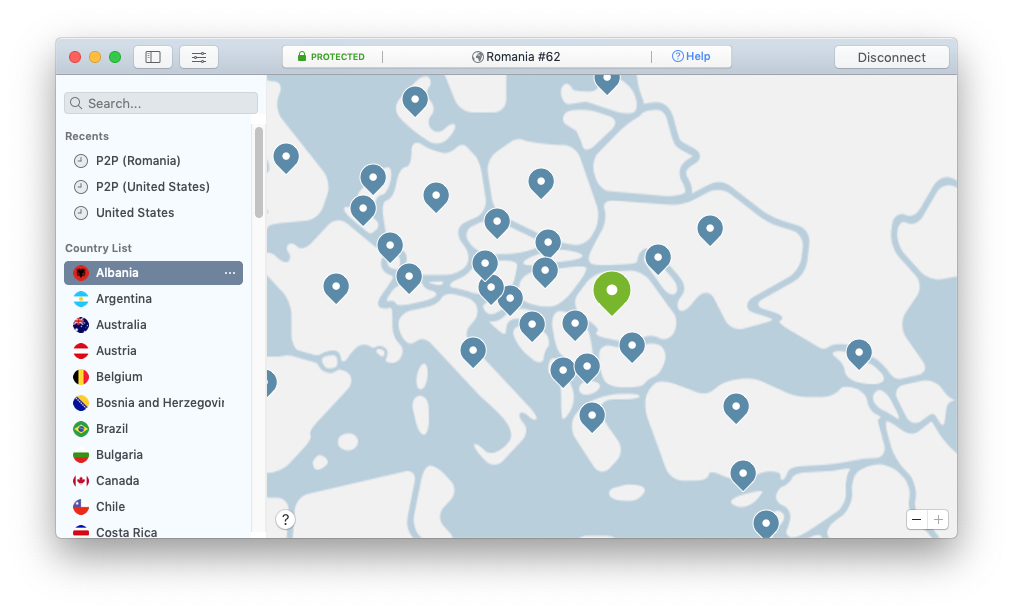 NordVPN has a split tunnel feature for all platforms which allows you to route some of your device or app traffic through the encrypted VPN tunnel while other traffic through your local IP without VPN protection. This is a good feature for apps or websites that are safe, that way you don't bottleneck your VPN traffic and slow down your speeds.

They offer a 24/7 live chat which is responsive.

They also have a dedicated support page where you can find FAQs, connectivity troubleshooting, billing, and general information.

Nord VPN's pricing is straight forward, they offer a variety of plans for your liking and it compares well vs other competitors. Plus each plan includes all of the features and functionality they offer so there is no upselling.

They do not offer a free plan, however with flexible plans, excellent customer support, and a top-notch product Nord VPN is worth the asking price. They do offer a 30-day money-back guarantee. Nord VPNs best deals are in the longer plans where they drop the monthly equivalent price significantly but you have to pay the full cost upfront which is a common practice among VPNs

We highly reccommend NordVPN, it is very fast and reliable while also offering the highest level of security. NordVPN rivals any top VPN on the market.

There is a lot to like about NordVPN, it passed all our tests.

Nord VPN is the leading industry standard for VPN services. With bullet proof encryption, user privacy in mind, and plenty of features. Nord VPN is a great all-around vpn and makes a case for our best VPNs, it's no wonder why its used by technology experts around the world.

Try NordVPN for 30 days, if your not satisfied they offer a money-back guarantee no questions asked!