To ensure your digital privacy choose a VPN that is based outside the 14 Eyes Alliance. A VPN is subject to the jurisdiction of the country it is physically located in and if warranted the authorities of that country can seize the server and examine it for information. If you are interested in a VPN located within the 14 Eyes, ensure to get a VPN with a strict no-logs policy.

What and who are the Five, Nine, and Fourteen Eyes 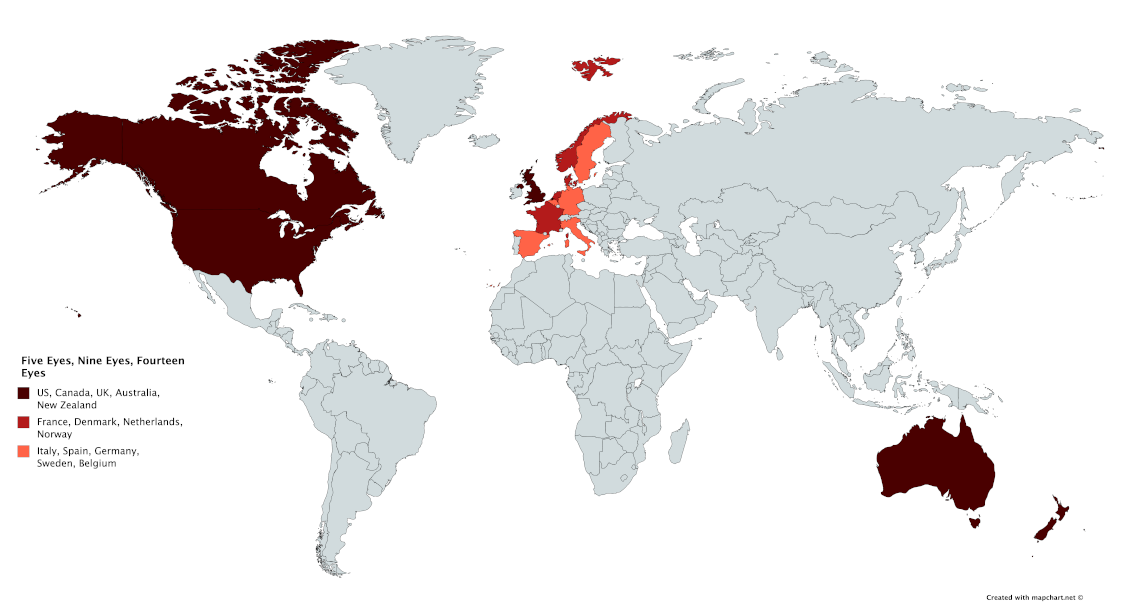 The 5 eyes alliance plus:

The 9 eyes alliance plus:

How did The Five Eyes originate?

The Five Eyes originally formed as a partnership between the United States and the United Kingdom as a way to gather intelligence on opposing hostile governments. The intelligence sharing agreement dates back to WWII and the UKUSA agreement, this treaty has grown immensely in members in the last few decades.

The Five Eyes have expanded into working collectively to collect, share, and share intelligence both domestically and internationally. Documents leaked by Edward Snowden uncovered some very controversial surveillance performed between the countries. He revealed that the countries are monitoring each other’s citizens to share intelligence and avoid breaking laws that prohibit them from spying on their own citizens. They work very closely to enforce data retention notices while allowing each other to receive data logs of users.

"Edward Snowden is an American whistleblower who leaked highly classified information from the National Security Agency (NSA) in 2013 when he was a Central Intelligence Agency (CIA) employee and subcontractor. His disclosures revealed numerous global surveillance programs, many run by the NSA and the Five Eyes Intelligence Alliance with the cooperation of telecommunication companies and European governments, and prompted a cultural discussion about national security and individual privacy."

The United States is the leader in mass surveillance. The NSA (National Security Agency) practice surveillance programs most notably a secret program called PRISM which captures the private data of citizens who are not suspected of any connection to terrorism or any wrongdoing. They have implemented a mechanism that allows the government to collect user data from companies like Google, Apple, Microsoft, Yahoo, and more.

In 2006 it was revealed that the US government was tapping all traffic going through AT&T’s internet surveilling its users without a warrant. While much of the NSA remains secret there has been plenty of advocates along with the public putting pressure on the US government to come clean.

The Nine Eyes are an extended group that includes the 5 eyes plus France, Norway, Denmark, and The Netherlands. These nations do not have domestic surveillance programs quite as problematic as the US, UK, or Australia but they still cooperate with the 5 Eyes alliance to gather and distribute mass surveillance data.

The Fourteen Eyes are an extended group that includes the Nine Eyes plus Italy, Spain, Germany, Sweden, and Belgium. These group of nations are commonly referred to as the SIGINT Seniors of Europe (SSEUR) and has existed in various forms since 1982. Originally started amid the Cold War with nine nations whose primary focus was on uncovering information about the Soviet Union’s military.

Since the 2001 attacks on the US it has expanded to 14 nations and they still actively and willingly participate in international intelligence-sharing. The SIGINT Seniors Meeting meet annually and attended by the leaders of SIGINT agencies including the NSA, BND, DGSE, GCHQ and more.